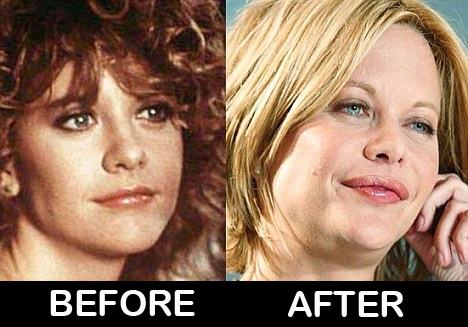 Back when Harry met Sally, Meg Ryan was known as “America’s sweetheart.” However, these days, Harry might not recognize her at all! Was it Ryan’s lack of sleep while in Seattle that forced her to go under the knife, getting rid of those dreaded dark circles?

Meg Ryan has never been known to comment on the plastic surgery rumors, but her notably plump lips and remarkably smooth face suggest a nip here and a tuck there. Indeed, lip implants, Botox injections, and a face-lift have all been reported. Without Ryan confirming any of these reports, we’ll never know for sure, but the before and after photos are extremely telling.

Her fresh faced, au natural, girl next door persona is what made Billy Crystal, Tom Hanks, and America fall in love with her over and over again.

The 53 year-old Rom-Com star has been out of the spotlight for quite some time. Is it because she may melt? Her last box office hit was 1998’s You’ve Got Mail. Oddly enough her starring role in the remake of The Women was not only a critic’s flop, but ironically followed the storyline of an aging, woman and the demise of her picture perfect marriage by hot pepper, Eva Mendes. Does life imitate art? Or is it the other way around? Meg’s beautiful canvas originally drew attention because of its simplicity. However, the film proved even with the help of Hollywood’s top surgeons, it is damn-near impossible to beat Ms. Mendes, or Mrs. Gosling…We don’t even know for sure!

In recent years, the celeb has made headlines for her on-again, off-again relationship with John Mellencamp. You do what you have to do to stay in the limelight, even when the flashing lights are no longer kind.

No matter how much time passes or how much her face changes, she will always be loved and remembered for her darling, winsome performances in such classics as Sleepless in Seattle and When Harry Met Sally. I will always want to have what Meg’s having.